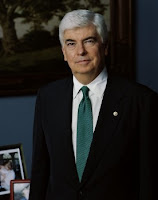 The Independent, a British newspaper, blames the Democrats for the failure of Fannie Mae and Freddie Mac:

What is the proximate cause of the collapse of confidence in the world's banks? Millions of improvident loans to American housebuyers. Which organisations were on their own responsible for guaranteeing half of this $12 trillion market? Freddie Mac and Fannie Mae, the so-called Government Sponsored Enterprises which last month were formally nationalised to prevent their immediate and catastrophic collapse. Now, who do you think were among the leading figures blocking all the earlier attempts by President Bush — and other Republicans — to bring these lending behemoths under greater regulatory control? Step forward, Barney Frank and Chris Dodd.

In September 2003 the Bush administration launched a measure to bring Fannie Mae and Freddie Mac under stricter regulatory control, after a report by outside investigators established that they were not adequately hedging against risks and that Fannie Mae in particular had scandalously mis-stated its accounts. In 2006, it was revealed that Fannie Mae had overstated its earnings — to which its senior executives' bonuses were linked — by a stunning $9.3billion. Between 1998 and 2003, Fannie Mae's executive chairman, Franklin Raines, picked up over $90m in bonuses and stock options.

Yet Barney Frank and his chums blocked all Bush's attempts to put a rein on Raines. During the House Financial Services Committee hearing following Bush's initiative, Frank declared: "The more people exaggerate a threat of safety and soundness [at Freddie Mac and Fannie Mae], the more people conjure up the possibility of serious financial losses to the Treasury which I do not see. I think we see entities that are fundamentally sound financially." His colleague on the committee, the California Democrat Maxine Walters, said: "There were nearly a dozen hearings where we were trying to fix something that wasn't broke. Mr Chairman, we do not have a crisis at Freddie Mac and particularly at Fannie Mae under the outstanding leadership of Mr Franklin Raines."

When Mr Raines himself was challenged by the Republican Christopher Shays, to the effect that his ratio of capital to assets (that is, mortgages) of 3 per cent was dangerously low, the Fannie Mae boss retorted that "our assets are so riskless, we could have a capital ratio of under 2 per cent".